Ever since I did the shoot with Megan at Palmer Head I had wanted to return there and try out some different concepts. Kristara and I had planned to shoot at the start of the year but somehow never managed to lock in a date when either our schedules or the weather could align properly. With time on my hands we managed to arrange a shoot for a Friday afternoon.

I wanted to go with two quite different looks. The first I wanted to utilise a homemade outfit that looks very Victorian. I thought that this contrasted nicely with the fact that Kristara has piercings and dreadlocks. Kristara added a set of goggles for a steampunk sort of look.

I planned on shooting inside of the gun emplacement and to add an extra dimension brought an old style lamp in which I has placed a speed light covered in an orange gell. The first shot the speed light was set to quite a high power and while it produced the desired effect it was real too bright. So the flash was wound back a little and the following image was produced.

While the  shot worked there was too much falloff in the light and so I positioned a second flash in a bounce umbrella to my right and then played with the positioning and angle of it until it only provided a level of fill and did not over power the colours I was looking for. 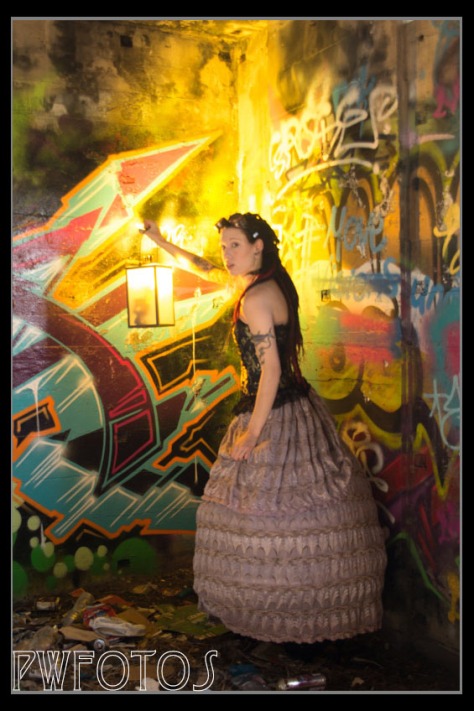 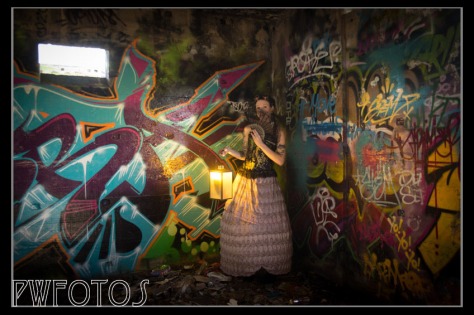 We did run into a major issue with the light in the lamp in that something kept creating a circuit that caused it to fire randomly. I suspect that it was something to do with the metal of the lamp. I managed to get enough good shots but it was frustrating.

For the final shot we moved into the main chamber of the complex that would have housed the actuals guns and I shot Kristara looking out. This is actually a composite of two images with one being exposed for her and the other for the outside, as there was two much difference in the light levels to handle in a single exposure.