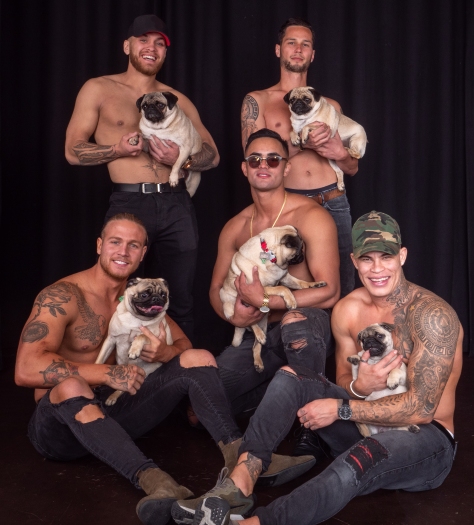 Occasionally a job comes along that sounds to both have the potential for a lot of fun, but equally stressful.

Venus Star is a Wellington entrepreneur, who has a range of business ventures, one of which is organising male strip reviews. The original brief was to shoot the show on the Saturday night, and then on the Sunday to shoot the performers with a group of pugs.

As it turned out I had to pass over the show to another photographer but decided to keep the shoot with the boys and dogs.

Venus had booked a hall for the shoot, which I had not seen so it meant that the car was loaded with a while of gear just in case. As it turned out it had a large stage with black curtains at the back.

I set up three lights all in the row across the stage so that it would have fairly even lighting while the dogs raced around.

I thought that we may have had problems with the dogs but as it turned out they were really easy to deal with.

We shot both individual and group images with them, and the advantage of the lighting position was that I didn’t have to move them. This was a major bonus as it meant the whole shoot was fairly quick.