The second shoot on day one of the Great Trentham Collaboration what’s with Jordan. Unlike Kasey, Jordan had spent the previous hour in hair and makeup with MUA Charlie Timmins.

She had chosen two outlets from Wellington designer Evem. Unlike my first shoot of the morning, this time we moved around the racecourse. We started in a small space   that I have discovered behind the make up room they have good natural light and a piano and us I thought it would make it interesting start.

We then moved outside and into an area this that is used on race day to stable the horses just before they come into the birdcage at the start of the race. Jordan does pole fitness and so she had no problem climbing up in the staples for a number of shots.

We then moved around the course and shot in a pavilion that is quite often used for outdoor weddings.

And then into an area that is immediately in front of the old grandstand. On our walk-through of the venue the week before I have noticed a old piano in the area and thought that this would be a great prop. As it turned out when we first arrived it was being used buy another photographer. So we moved a little further down and again Jordan showed her gymnastic ability.

I been noticed a number of windows and thoughts that we might be able to capture reflections on them. This was true however the glass had the remnants of sticky tape on it which I could not remove. Fortunately photoshop can.

For my final shot we moved a large gate in-place and Jordan made out that she was trapped. 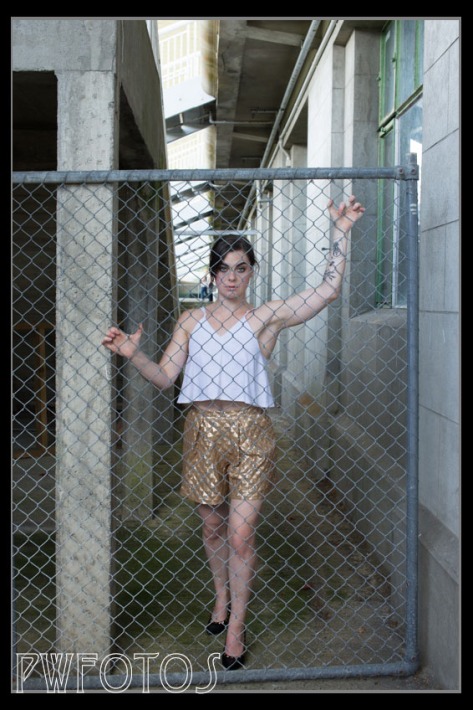