The third image in the model series was entitled “Keeping Cleaning”.  While the intention with each of the concepts is to produce a single image, this shoot has actually produced two, and so I am trying to sort out which one I will end up using in  the series. 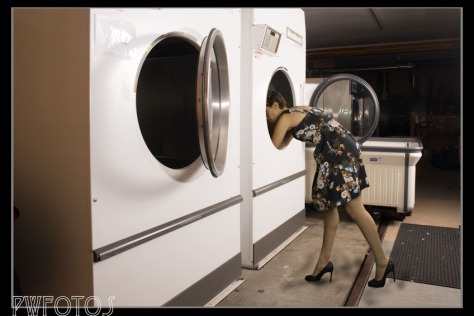 Not far from my home is a commercial laundry which I thought I could approach to get the background shots I needed. I had decided that it was better to composite the image rather than try to arrange for a location.

I cut a circle in another one of the bike boxes that had been obtained for the “Past Use By Date” shoot and then attached it to the front of the box. We stood the box up and then positioned it on two chairs to get it to the right height for the machine.

For the shot of Christa inside of the machine the box was lowered to the floor and she carefully climbed inside. 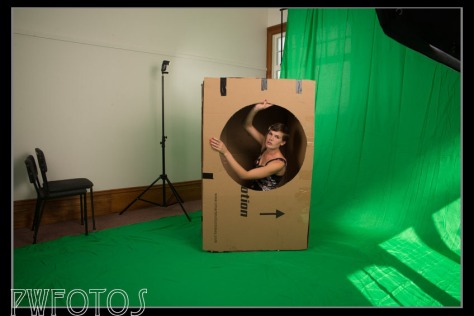 I visited the laundry on a Saturday morning (when it was closed) and we took the required shots. The ones from the studio were on my iPad so that I could line this up as best as possible. The laundry manager was more than happy to help out and in fact she said that the machine was more than capable of handling Christa’s weight and that I could bring her along should the composites not work.

I tried to replicate the lighting as close as I could to that shot in the studio however an exact match was not possible as it was necessary to avoid reflection in the glass doors of the machine. As it was I was not able to completely eliminate them and had to fix the image in photoshop.

I was very pleased with the result that came out. The only issue with shooting against a green screen is that you can get a colour cast on the skin. This is shown in an earlier version of the composite. I still need to do some more work on removing this before the final image is produced.

By sheer fluke when I posted the images on Facebook one of the people who viewed it pointed out that the name on the machine Huebsch is German for “Pretty”. I have checked this out and it is not quite correct and in fact Hubsch is the correct spelling however they are pronounced the same way.