If you shoot weddings you know that they can be quite stressful at times because there are keys shots and moments that you have to record, that basically you can ask for a re-shoot. It is almost the same at kids birthday party. 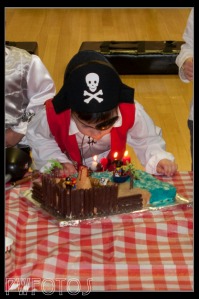 Except at weddings you generally don’t get the other wedding party deliberately trying to get at the wedding cake, nor getting in the shots (well nearly not always).

Rogue is the 4 year old son of Photographer friend and she asked me along to record his birthday. He was so eager to blow out the candles that he started even before his mother had the cake on the table. Fortunately I managed to get in at least one shot of his efforts at extinguishing them.

And if your wondering about the title of this post. Well the party was held at a cafe that had a Karate Dojo attached to it. While the theme of the kids was pirates, the session was run as a Karate birthday party complete with Kata sessions and games.

The organiser from the Dojo admitted later that they normally ran such parties for older kids as three & four olds are not the easiest to listen to instructions or stay focuses. In fact for some the games they headed off in all directions. A bit like how a bunch of cats would behalf. 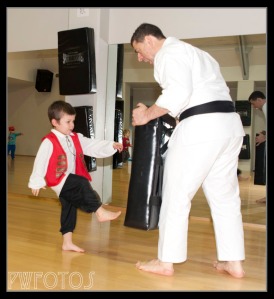