One of the things that I firmly believe in is if someone helps you out then you should return the favour. Tiffany Williams, who is the makeup artist who helped me out on the Book Queen series, works at Tawa Hair Salon. They wanted to do a series of shots that promoted what they could do and I was more that willing to help out. The images from the shoot were intended to be used both on Facebook and in print.

So last Sunday I ended up at their salon for the shoot which consisted of three female and two male models.

Taking photographs of hair dressing is quite tricky. While it is simplistically a portrait you are trying to bring out the details in hairstyles and this can present an issue depending upon the colour of the hair.

The original intention was to shoot each model on a number of backdrops so I set up a white, blue and multi-colour backdrops in such a way so it was a simple matter of changing them. This would enable them to use the same image in different setting. As it turned out the white background was the only one suitable for all models.

I used a simple two light setup. My main light was slightly to camera right and was in a 1×1 metre softbox. A second light was fitted with a small gridded reflector and mounted on the end of a boom arm. This was then positioned either above or on the opposite side of the model to bring out the highlights in the model.

I did experience some issues with my gear early in the shoot and there was a couple of minutes of panic as the camera refused to fire. Fortunately it resolved itself however it did reinforce the need to ensure that you have back of key gear available.

I am quite pleased with the results and I hope that the client is as well. 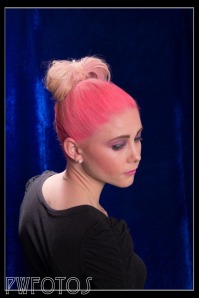 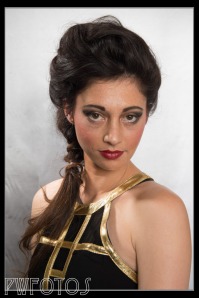