One of things that attracted me to the Lumix G9 was it’s very high shutter speed and high frame rate. While I was evaluating the camera I did a series of images freezing water at something like 1/2000 second.

Now that I had the camera I wanted to put it through it’s paces and see if I could create a milk dress. This is a relatively simple concept. Find a willing naked model. Thow milk on them taking lots of shots and then in photoshop merge them together to create a dress.

Traditionally the approach is to shoot inside in a studio using flash to freeze the action. The camera is set to the maximum sync speed and it is the shortness of the flash duration that achieves the result. This is effective but it means that you only get one image for each throw.

I wanted to do it completely different and shoot outside under natural light. This let me use a higher shutter speed and more importantly using the burst function meant that I could capture the entire throw.

A facebook post got me a willing model (Evie), a makeup artist (Ania) and two assistants (Peter & Nick), and the shot was set to kick up at 1:00pm.

Knowing that I would be dealing with the potential of harsh light I built a 2 metre x 2 metre scrim out of PVS piping and frost-cloth. All up it costs around $25. Then I bought a sheet of 4×5 metre black polythene that was used as the backdrop. Three pieces of timber were placed under it to create a small pond. 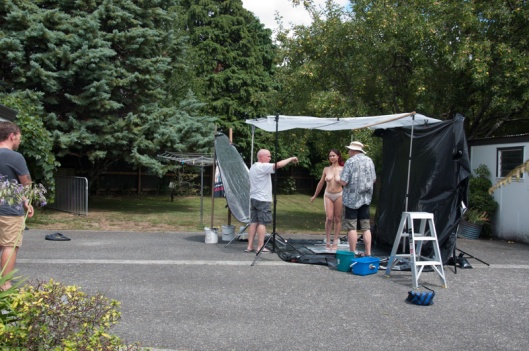 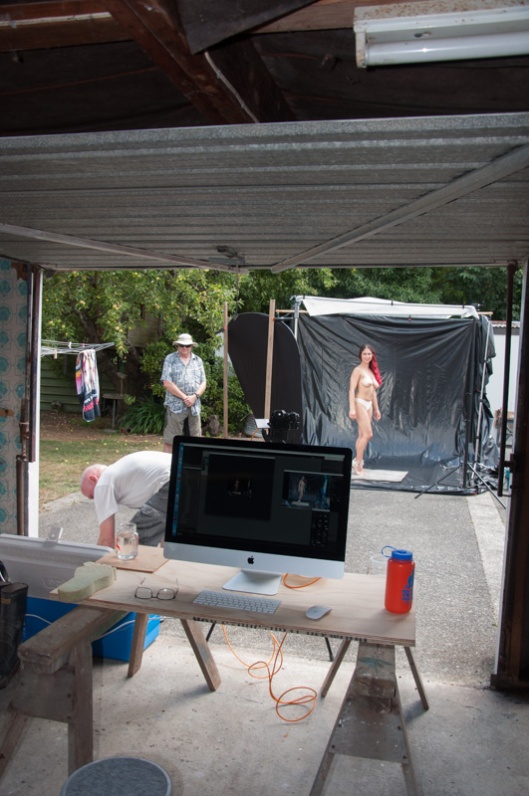 The camera was tethered to the computer which was located in the shade of the garage.

As Evie was going to be wearing heels, I placed a small piece of rubber under her feet so that she would not go through the material.

12 litres of milk was purchased and left in a chilly bin overnight. Several clips that I had seen had recommended that you warm the milk. We did not do that as the forecast temperature for the shoot was 27 degrees so I figured that cooler milk wold be refreshing.

I moved my mac to the garage and tethered the camera to it. This meant that the camera was well away from the mess, and also I could see the images coming off in greater detail. Panasonic has a very good tethering app that lets you have full control over the camera. This was good especially when I discovered that there is no support in Lightroom for tethering from the camera.

Shooting outside is always a challenge. While the day had no wind, cloud kept coming over and that meant that we had to boost ISO to maintain the shutter speeds I wanted.

I had developed a plan of how to place the milk starting from the top down. It took a little time to work out what the appropriate quantity of milk was.

We ended up shooting for around a hour getting around 500 photos. By this time the milk had got quite warm and was starting to smell. Evie was very grateful when I called the shoot to an end. We initially used the hose to wash her down before she headed to the shower.

Later that night I did a quick edit and picked the bets images and mashed them together. I will probably re-edit is later when I have more time.

Overall for a first effort I am reasonable pleased with the results.