In this third instalment of the Gear Trap I am going to look at the various modifiers that are available when you are shooting with some form of artificial light.

Light is described as being hard or soft basically depending on how intense it is at the edges. If you look at the shadows cast by an object you can easily see this. Hard light will cast very sharp edges to the shadow, where a soft light casts shadows with a gradual fade off at the edges, or now shadow at all.

Whether light is hard or soft is actually a function of the size of the light source relative to the subject. It is through the use of modifiers that we can modify the light source. Below I will give you an introduction into the main sorts of light modifier. It is by no way a complete list.

Bounce Umbrella
The bounce umbrella looks exactly like the one you would use to keep you dry in the rain with one big exception. They are generally lined with black on the outside with white, gold or silver on the inside. A white lining will reflect light at the same colour that it hits it, whereas the silver produces a colder (blue) light and the gold a warmer (red) light. The umbrella works by spreading the light out. Of the three linings silver does produce the harshest light.

Umbrellas can spread the light out but they are sometime a little cumbersome to use especially in crowded areas.

Shoot Through Umbrella
A shoot through umbrella is made from white material and the flash is mounted in exactly the same as the bounce umbrella but the whole unit is positioned so that the umbrella faces the subject.

Essentially a shoot produces a light similar to a softbox, and you can position the umbrella reasonable close to the subject. The major disadvantage that shoot throughs have is that unless you modify them there is no effective way the direct the light.

A nikon sb600 speedlight inside a softbox has filled in the details on this image taken late in the day.

Softbox
Softboxes are normally made of black material with the inside line with silver. The strobe goes in a small hole in the rear. The front is mush larger than the back and is generally covered with a white material. In some models a second white panel can be fitted between the light and the outer covering.

Softboxes come in all shapes and sizes. They produce a very soft light which is also relatively easy to control the direction of.

Beauty Dish
A beauty dish is a round metalic dish that is scalloped on the inside. The strobe is mounted in the middle. A panel directly in front of the strobe directs all the light into the bowl whereby it bounces out in lots of directions. This produces a light with few shadows. Beauty dishes were extremely popular in the 1950/60’s and were used to produced most of the Hollywood glamour images taken at the time. 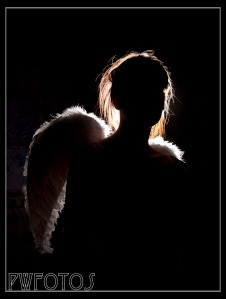 A snoot has been used to provide a very focused light.

Snoot
This is a cone shaped devise that fits over the end of the light and directs in a much narrowed beam. It is very similar in concept to the spotlights that you see in the theatre. When used in such a way the light it produces is every hard, with little fall off at the edges. They are therefore used primarily as an accent light, or a hair light. A honeycombed grid can be fitted to them if you wish to soften the light slightly.

So what is the light modifier to use? Sorry but that is a question that will end up with the same answer. “It all depends on the look you want”. A particular 3 light set up may have a beauty dish as its main light, a softbox filling in some shadows and a snoot to act as a hair light (which is intended to provide separation from the background).

Also different subjects will require different modification. For example a women in her 50’s would generally not look as good if shot in the same light as a girl in her teens.

One final word of warning though. If you a looking to buy a softbox for your speedlight don’t buy the really little ones that clip over the flash as they make very little difference to the quality of the light.